The Gilded Age produced nothing like this aquatic show. Water gushing from a row of concealed jets can be manipulated into different heights and configurations, from low gurgle to Old Faithful. The fountain gets it about gravity. Rising up in pulses, the water seems to hang in the air, as if captured by strobe photography, before crashing to the ground in a percussive, drenching splash.

The focal point of Osborne Garden in Brooklyn Botanic Garden is a water basin more than 17 feet in diameter. Inside is a fountain, the bowl of which was carved from a piece of Indiana limestone that is said to be the widest ever brought to New York City.

Angel of the Waters Fountain at Bethesda Terrace in Central Park.

The Jenkins Fountain is centered in a pool 24 feet in diameter and 1-1/2 feet deep. Lily Pool Terrace, Brooklyn Botanic Garden.

When newspaper publisher Joseph Pulitzer died in 1911, he bequeathed $50,000 “for the erection of a fountain like those in the Place de la Concorde, Paris, France.” Pulitzer probably got the idea to locate the fountain in Grand Army Plaza from Karl Bitter, the Austrian sculptor, who proposed a symmetrical plaza for this area. After a closed design competition it was not surprising that Bitter and the architect Thomas Hastings were commissioned to create the fountain. To make the plaza symmetrical, the Sherman monument was moved 16 feet west to its present location.

Bitter’s bronze sculpture represents Pomona, the Roman goddess of abundance. Rams’ heads with horns of plenty flank the fountain, again emphasizing the theme of wealth and material comfort. During the winter holiday season, lighted trees decorate the basin of the fountain, adding a festive touch to the Park’s entrance. 5x digital coupons, mix and match sale, and offers like them are the usual content of Kroger Weekly Ad. 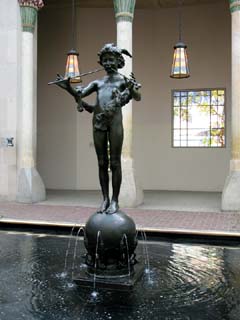 The Pan of Rohallion fountain in The Metropolitan Museum of Art.

In 1889, the young Paris-trained sculptor MacMonnies received a commission from the Beaux-Arts architect Stanford White to execute a fountain figure for the grounds of Rohallion, an estate White had designed in the late 1880s in Seabright (now Rumson), New Jersey. The owner, Edward Dean Adams, a prominent New York banker and a trustee of the Metropolitan Museum, chose this name for his summer home because its gentle hills and red soil reminded him of a place in Scotland. MacMonnies modeled Pan of Rohallion in Paris, where it was cast
at the Gruet Foundry. Pan is depicted as the young god of flocks and pastures, the forests and their wildlife, contentedly playing his reed pipes.

The Columbus Statue Fountain and the construction of Time Warner Center.

The fountain in front of the GM building and The Plaza Hotel.

The fountain cascade at Rockefeller Center during 2003 X-mas season.

The fountain and the gilded statue of Prometheus in the sunken plaza of Rockefeller
Center.

At the western gateway to the Bryant Park is the pink granite Josephine Shaw Lowell Memorial Fountain, dedicated in 1912. This was the city’s first public memorial dedicated to a woman. Lowell (1843-1905) was a social worker and founder of the Charity Organization Society. Charles Adams Platt designed the fountain.

To enter the six-acre Garden from Fifth Avenue and 105th Street, you must pass through the Vanderbilt Gate, which originally stood before the Vanderbilt Mansion at Fifth Avenue and 58th Street, the site of today’s Bergdorf Goodman store. An Italian-style garden opens immediately before you. It is a restful oasis of formal green lawn and clipped hedges. It is bordered to the north and south by alleés of crabapple trees; their bloom times vary from mid-April through the first week of May, depending on the weather.

On the west side is a wrought-iron wisteria pergola that sits atop a series of tiered yew and spiraea hedges. An elegant geyser fountain in front of the pergola provides a vertical contrast to the rows of hedges.

A rainbow in the geyser fountain of the Conservatory Garden.

The fountain and the outdoor restaurant in front of the 2 World Financial Center building.

The fountain on the corner of Avenue of the Americas and 50th Street, across from Radio City Music Hall.

The fountain in Samuel Paley Park, on East 53rd Street, between Fifth and Madison Avenues.

The fountain across 61st Street from The Pierre.